You are here: Home / Health / Bipolar Disorder: How Can We Understand It?

Have you or your loved one received that devastating diagnosis? See how my journey has lead me to finally understanding my Bipolar Disorder. 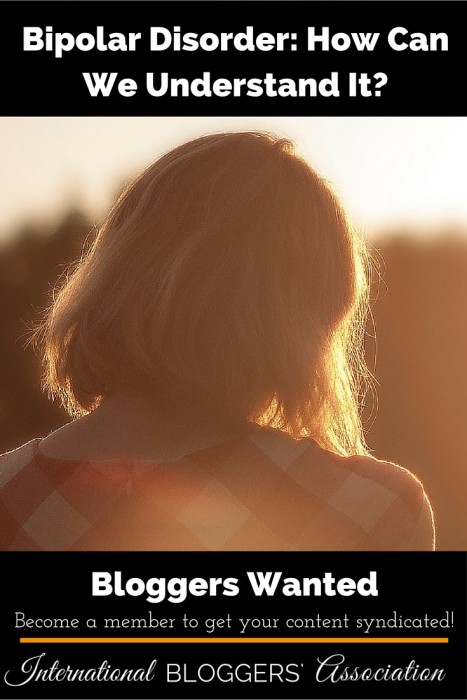 Understanding Bipolar Disorder was originally published on The Sunny Shadow by Krista Pfeiffer.

It’s no secret that there’s still major stigma surrounding mental illness. I have to admit that before I was diagnosed with bipolar II disorder in 2002, I was fairly ignorant in this regard myself. Though following my diagnosis, my husband was the one who did endless research – not me! I was in the throes of mania.

I don’t think my situation is that unique. Most people aren’t “experts” on illnesses until they have to be. So unless you {yourself} have been diagnosed with bipolar disorder or you are close to someone who has, you likely don’t have a great understanding of it. And that’s okay. But if you’re interested, I may be able to change that. I should mention that I am sharing my personal experiences with bipolar disorder, along with some general facts. {Sources below}

WHAT IS BIPOLAR DISORDER?

BIPOLAR DISORDER {manic-depressive illness} is a brain disorder that causes unusual shifts in mood, energy, activity levels, & the ability to carry out day-to-day tasks. It is a lifelong illness. Though there is no “cure,” it can be managed & people with this disorder can live full & productive lives.

Symptoms are severe & different from the normal ups & downs that everyone goes through from time-to-time. Bipolar symptoms can result in damaged relationships, poor job performance, & even suicide.

The beginning of mania is exhilarating – euphoric even. My speech is fast & pressured, as I can barely keep up with all the brilliant ideas racing through my mind. At least I feel as though they’re brilliant at the time. Unfortunately grandiosity is a part of the disorder & the further into mania one goes, the more grandiose one becomes.

During hypomania I have tons of energy & get loads of stuff done. However, if that red flag is ignored hypomania can quickly escalate into full-blown mania, which is rarely fun for anyone. For me, mania is like a tornado, destroying everyone & everything around it. While I wish hypomania was my permanent state of existence, I can always tell when I’ve crossed that imaginary line into mania. I feel as though I’m going to jump out of my skin. Sleep is elusive.

[bctt tweet=”Mania is like a tornado, destroying everyone & everything around it. #MentalHealth @KristaPfr “]

I find it impossible to convey how it truly feels to be manic unless in the midst of it. It’s almost like an out-of-body experience. I’ve only had one full-blown manic episode which was when I got diagnosed. It’s called “Peripartum Onset,” occurring soon after the birth of my second {& last} daughter. Initially I thought what I was feeling was postpartum depression. My exact words to my OB-GYN & new therapist were, “I feel like I’m going crazy.” My new therapist reassured me, saying that ‘crazy people don’t think they’re crazy.’ I hung onto those words as my doctors worked on a diagnosis & treatment plan.

In the meantime, I was abusing alcohol in an effort to self-medicate, which worsened & prolonged the situation. This also negated the therapeutic effects of the medications being prescribed. I was in full self-destruct mode & if you were around me, you got dragged down, too. There was self-mutilation, suicide attempts, & hospitalizations. It was a painful time that tore my family apart for almost two years. I finally accepted help & went to a co-occurring rehab facility that saved my life, along with Alcoholics Anonymous.

Thankfully, I haven’t had another full-blown manic episode since then. I take preventative measures. I do NOT ignore red flags, I am honest with my doctors, I ALWAYS take my medication, & I listen to the feedback given to me. Although I wouldn’t change my past, I want it to stay just that – my past. Read my personal story of change → MORE ABOUT ME.

If anything above sounds familiar, please contact your doctor.

To see more of Krista’s journey please visit her blog for the complete post.

63shares
We use cookies to ensure that we give you the best experience on our website. If you continue to use this site we will assume that you are happy with it.OkRead more