You are here: Home / Featured Posts / What is a Twitter Party and Why You Should Join In 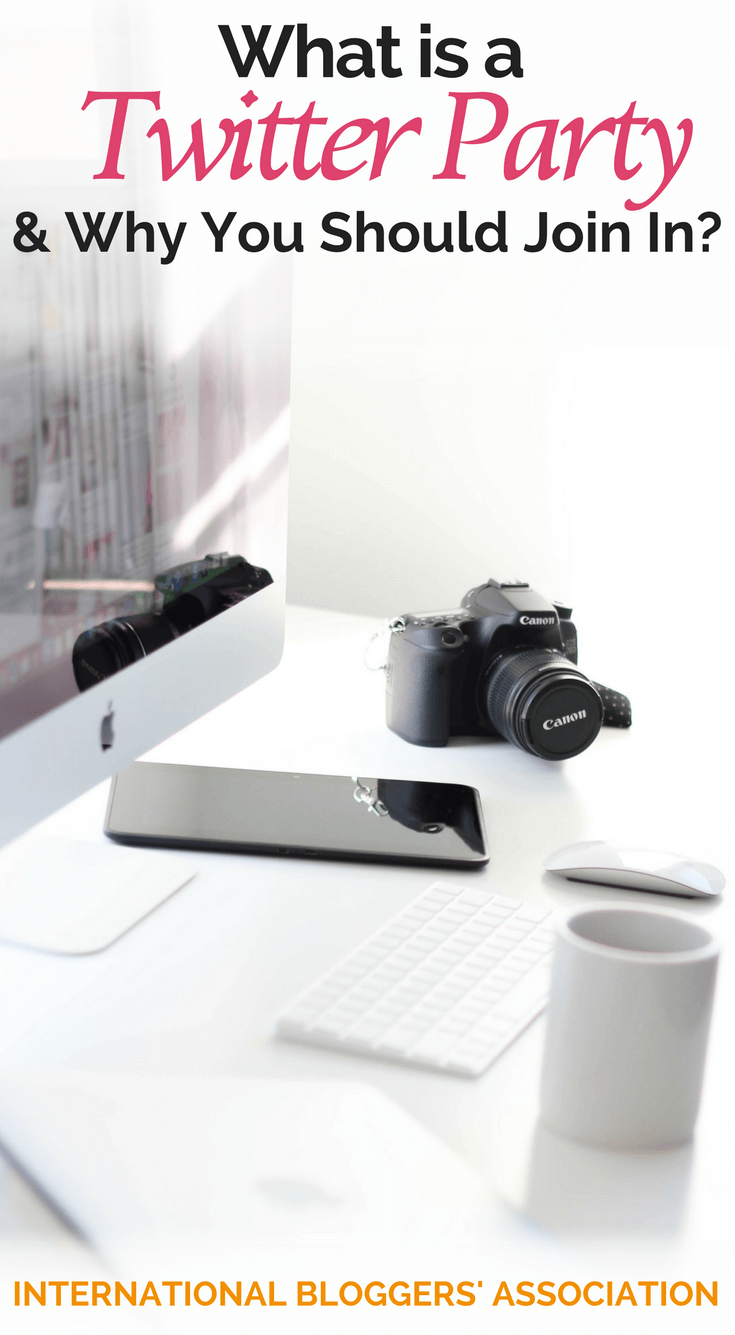 Twitter Parties are a fun way to connect with new like-minded friends (or bloggers) on Twitter.  This will help you increase your number of followers.  Twitter parties can be fast-moving conversations that sometimes include hundreds of people. Taking that into consideration, it’s no surprise that Twitter Parties are a great way to quickly grow your social media reach and engage in interesting conversations with current and potential followers and/or customers. Think of a Twitter Party as a super-charged, online Meet-and-Greet networking opportunity.

Twitter parties are often sponsored by brands looking to get the word out about their services or products. Take this as an opportunity for you to connect with these brands and get your name out there. Brands ask social media influencers to host Twitter Parties for them all the time. You never know, you might be their next host!

They’re Lots of FUN… and you may even win cool prizes!

You’re Guaranteed to Learn Something New

Depending on the topic of discussion, Twitter Parties may include an invited panel of experts who participate in the conversation and keep it moving along. When participating in a Twitter Party, whether you’re a mom, looking for a good recipe, or want to connect with other bloggers, you are guaranteed an opportunity to learn something new. The experts will share tips and tricks and you are sure to learn something that will help you step up your game.

As I already mentioned, a Twitter Party generally has one or more hosts. These hosts will promote the event ahead of time, invite their followers and spread the word using their social media networks. They share the specified hashtag(#) ahead of time. They may even publish a blog post announcing the party. The Twitter Party hashtag may incorporate the name of a brand or a specific topic. Once you know when the Twitter Party will take place, just search and follow the given hashtag to participate.

You may have also heard of the term Twitter Chat. Although a Twitter Party and Twitter Chat may have similarities there are some factors that can make them a bit different. Generally, these are the differences I think of when comparing the two. Depending on who you ask, you’ll get different takes on it.

Did you know that we now have a weekly Twitter Chat?

You can get a recap of our inaugural #IBAChat by clicking here. Then go here to see our scheduled topics and view more instructions on how to join. Don’t forget to search the hashtag #IBAChat and join in the fun every Wednesday at 12 pm EST.

Twitter parties and Twitter Chats are both great ways to make new connections, grow your followers, and learn a lot about blogging. Your participation will get your name and brand out there! If you’ve never attended a Twitter Party or Twitter Chat it can be a bit overwhelming at first. The conversation and interactions (via tweets) will usually go relatively fast. Both are open to the public and are easy to join.

Simply follow the hashtag associated with it. Make sure to follow it during the scheduled time so that you can see the live tweets and interact with other participants during the Twitter Party.

At first, you might want to just follow along and observe a couple of Twitter Parties to get a good feel for it. During a Twitter Party, hosts will usually tweet out questions related to a topic, product or brand. This will keep the conversation going and make it engaging for participants.  Participants will reply with answers via tweets and they’ll also comment on what others have to say.

You will notice that each tweet during a Twitter Party contains the hashtag associated with it. Remember that this is how participants will find each other during the Twitter Party, so again, if you decide to jump right in, don’t forget to include the appropriate hashtag in your own tweets.

The main things to remember when joining a Twitter Party

How To Keep Up During a Fast Moving Twitter Party

The conversation during a Twitter Party moves REALLY fast! It can feel really hard to keep up and might even overwhelm you at first.  Eventually, if you find yourself participating in Twitter Parties regularly, you will want to simplify the process by using one of the many helpful websites that allow you to easily follow the hashtag Twitter stream. Websites such as twubs.com or tweetchat.com can be very helpful because they allow you to pause/resume the flow of the conversation. Services such as  TweetDeck or HootSuite are also very popular because they allow you to set up multiple columns where you can not only follow the hashtag stream but also monitor your mentions, retweets, and likes. This makes it much easier for you to participate in a Twitter Party.

I personally use TweetDeck and it makes my Twitter Party participation a more enjoyable experience. You can click here to see a video that will show you exactly how to set up TweetDeck for use during a Twitter Party.

Where Can I Join the Party?

Start by joining our #IBAChat on Wednesdays at 12 pm EST.

Below are several other Twitter Parties and Twitter Chats that I think are great for bloggers to take part in. You don’t have to participate in all of them. I suggest choosing one or two per week to get started!

#bbloggers on Sundays at 3 pm EST.

#blogchat on Sundays at 9 pm EST.

#SITSBlogging on Mondays at 8 pm EST.

#BlogElevated on Mondays at 10 pm EST.

#bbloggers on Wednesdays at 3 pm EST.

#LinkedMoms on Wednesdays at 8 pm EST.

#BloggersGetSocial on Wednesdays at 9 pm EST.

#SITSBlogging on Saturdays at 10 am EST.

Hope you have found these Twitter Party tips useful and that they will motivate you to jump right in and join the party.

Monica is a proud board member of the International Bloggers Association and works as our Original Content Manager. A born and raised NYC girl, she loves raising her family in the city she's always called home. Monica is passionate about EdTech and considers herself a digital-lifestyle enthusiast. You'll find her sharing tidbits about her life over at NYCTechMommy.com, where her mission is to inspire families to live simple, live fun and live life with tech.  Follow along on Facebook, Instagram and Twitter