You are here: Home / Syndicated / One Epic Travel Nightmare

Have you ever had unexpected problems while traveling? This family had one epic travel nightmare, to say the least! Read along to see what happened over three days!

Leaving home for six weeks to visit family over 2000 miles away by car is HECTIC, to say the least. It is NOT a vacation. Despite our love for our family and friends and the joy of seeing them in person, this trip is NEVER relaxing. And the drive home from Kentucky, USA to Michoacan, Mexico… Well, that part was an epic travel nightmare involving three flat tires, two dead batteries, and a new fuel pump in three days. Yes, that really happened.

Arriving in Kentucky – The Fun Begins

Getting to Kentucky was easy and uneventful. Once we were there, the troubles began. Our transmission, which was repaired in Mexico seven months earlier, decided to give us problems as soon as we arrived. And wouldn’t you know that it was only one month past its repair warranty!? Instead of taking it to the shop right away, we planned, (notice I say we planned), to drive it back to Mexico and have it fixed there. Almost everything is cheaper in Mexico. That includes transmission work.

The second week of our trip, I was involved in a minor car accident. After I had made a left-hand turn at an intersection, a car came over a hill and hit my right, rear quarter panel, and bumper. Thankfully, no one was hurt. It shot my nerves for the day, though. We put the $1000 we received from the insurance for the damage in our savings and decided to make the repairs when we returned home to Mexico. You know, like the transmission work… to be continued…

Needless to say, putting two families into one home is not easy. All in all we, (our parents and us), did a-okay. Everyone survived our time in Kentucky, physically and mentally 🙂 Brad may say differently… hahaha… but I missed everyone before we even left, although I was eager to return to Mexico.

We have many friends and a large family. Thus it was impossible for us to spend time with everybody. We tried our best but our social life basically quadruples when we return to Kentucky, and we are never ready for it! Life is slower in Mexico despite being loco with four kids, and actually… we like it that way!

Course then you have the horrid shopping experience, where an employee subtly tries to kick me out of Goodwill, and another shopper threatens to call the cops on me… yes, really. If you haven’t read that experience yet, you should!

And What Happened to The Transmission?

If you couldn’t tell from the first subheading… the transmission did not last till Mexico. We waited until last minute to get it fixed in Kentucky. So we remained in the US for an extra two weeks. The plus to this is that Brad had an acquaintance willing to give us a good deal. So far, so good. I pray that we won’t have transmission problems for a long time.

The insurance money from my minor car accident came in handy at this point. Instead of using it to repair the body damage, we used it, (plus some), for the transmission costs. We will use our money for the body work here in Mexico. Maybe, just maybe, that accident wasn’t such a bad thing after all! Let’s get on to more of our epic travel nightmare.

The Epic Travel Nightmare – From Kentucky to Mexico

According to Webster’s epic means:

Other than the hero part, everything else about epic fits our trip home perfectly. It all began with a flat tire…

Two miles from my Dad’s house we blew a trailer tire and an old farmer stopped to help us put on the spare. Before the farmer stopped, Brad shut off the #truck and we got a jump start from a military convoy I flagged down. They let us use their cell phones to call friends. BTW I placed two Bible tracts with them cause we are missionaries 😉 Now we are at O’Reillys making sure we are okay to go. We killed the battery twice this morning while packing cause we are going cra cra trying to get #home to #mexico #gringoslocos6 #cartrouble #roadtrip #traveling #kentucky #kindness FOR ALL THINGS MEXICO, #FAMILY #TRAVEL, AND #CRAZY FOLLOW ME AT WWW.GRINGOSLOCOS6.COM

So if you saw the previous post…. after #traveling 20 miles further our other tire blew on the trailer…. and Brad shut the #truck off again, causing the battery to die again. O’Reillys said we needed to keep it on for a while. This time no one wanted to stop, except a nice trucker and a state trooper. Seems someone saw me waving like a mad woman and called 911. We rearranged all of our belongings, put on the second spare tire, and the trooper jumped our truck. Then we went back to #Lowes and bought another tire. Basically we made 20 miles in five hours with four kids. #traveling #roadtrip #kentucky #cartrouble #gringoslocos6 FOR MORE #MEXICO #FAMILY #TRAVEL AND #CRAZY FOLLOW WWW.GRINGOSLOCOS6.COM

Before the next post, we had almost made it to Texas! However, it was not an uneventful drive…

If you haven’t read the two posts before this one, you should catch up. We left #kentucky 18 hours ago. In addition to two blown trailer tires, and two times killing the battery, we can add getting lost in #Memphis for a hour, and the truck dying at a potty break, only to be resurrected by an nice old man kicking the fuel pump. Getting ready to enter #Texas and then it’s on to mexico FOR MORE #CRAZY #FAMILY #MEXICO AND TRAVEL TALK FOLLOW WWW.GRINGOSLOCOS6.COM. #traveling #roadtrip #cartrouble #badday #gringoslocos6 #ibabloggers #sitsgirls #face #momlife #selfie #follow #momblogger

These flowers look so pretty right? Yeah, I had a little time to admire them…

#Texas has beautiful #flowers along the highway. This is the fourth post in a series. You need to read the WHOLE story. It’s nutty. The #truck has officially died. It is either out of gas and the gauge is off, or we need a new fuel pump. We have a state trooper, a tow truck, and some friends helping us. Our new friends took Brad to get gas before using the tow truck… we found our friends via Jw.org 😉 #traveling #badday #cartrouble #roadtrip FOR ALL THINGS #MEXICO #FAMILY and #TRAVEL #follow www.gringoslocos6.com. #gringoslocos6

Yes. We borrowed the trooper’s cell phone and found the number of a nearby Kingdom Hall. A fellow Jehovah’s Witness answered and then came to our aid within the hour. We had never met this man before in our life. He cared for us and found us a place to stay. That is our united worldwide brotherhood, and I love it!

Did I mention that I stepped in a pile of fire ants too? Let the travel nightmare continue…

Ugly feet, I know…. anyway when the truck broke down yesterday I stepped in a pile of #Texas #fireants Those little #bugs were all over my shoes. Apparently they are poisonous and even kill small animals, babies, and elderly ones 🙁 #gringoslocos6

I will not elaborate on the next pic. Let’s just say our short stay in Texas while our fuel pump was being replaced was not without incident. Sometimes I guess we just get kicked while we are down, and we have to deal with it.

The last six weeks were overwhelming but this was nothing compared to the trials experienced the last few days. Wowza. I am sick with a head cold on top of it all. Sometimes the Devil just won’t let up. I don’t want sympathy. No one is perfect. Everyone suffers from something. However a few words: Don’t presume to know someone you met only days before. Don’t blast someone with “advice” when they are already on the floor. This only causes more harm then good. Giving counsel is not a position many of us have. Who is good but God?

Before the next pic, we had a great day in Laredo, Texas with some more friends. The kids had pool time, I had shopping time, and Brad had rest time. Whew!

Third flat tire on this #roadtrip five hours from home. We are back on the road again. #mexico #gringoslocos6 #expat #livingabroad #cartrouble #travel

Our third and last flat tire were deep in Mexico. Right in front of a tire shop, of all places 🙂 An old man changed out our flat tire for a new one we had purchased in the US. It was relatively simple and fast. Thank goodness for small victories!

What have we learned from this travel nightmare? That sometimes life is just plain stinky. Period. But hey, it made for an epic blog post! And I can’t tell you how happy we were to arrive at our home in Mexico.

Although our story doesn’t end there! Nope. Within the month we would be hurting from the death of Brad’s grandpa and moving to a new home. Such is life. If you take a lickin’, just keep on kickin’. Does anyone know where that old saying came from? I should Google it, but my bed is calling me. Signing off, Tina

What is your worst travel nightmare? Leave me a comment below! 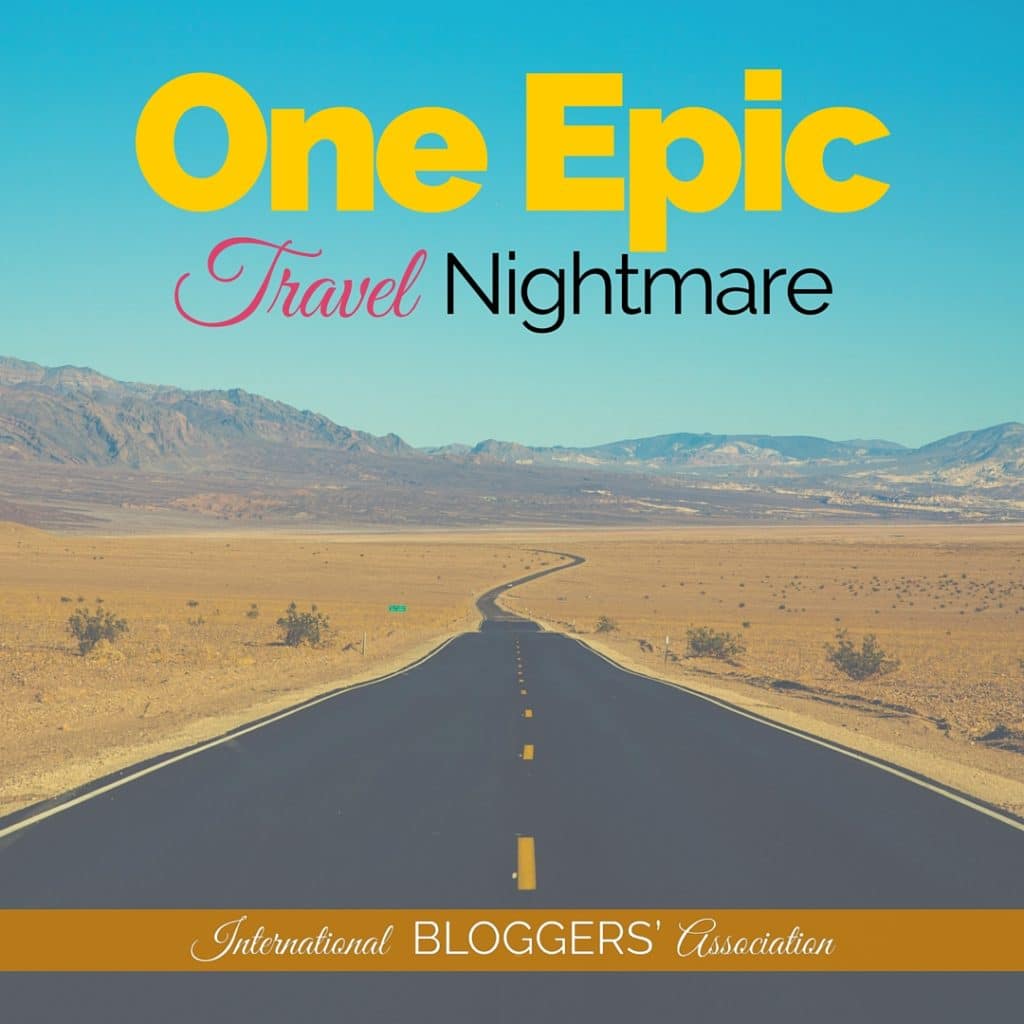 I love dancing like no one is watching, drinking red wine, traveling almost anywhere, making my kids laugh, kissing my husband, and bringing people good news. What do you love? ~ Tina
**Learn more about Tina at Los Gringos Locos. You can also follow her on Facebook and Twitter.